This simulation protocol contains all information necessary to run climate-impacts simulations consistent with other models participating in the ISIMIP2a simulation round. The protocol is divided into 15 chapters: chapters 1-5 contain important information for modellers in all sectors. Chapters 6-14 provide sector-specific instructions (can be downloaded separately below, including the references) and chapter 15 contains the references. For any queries, get in touch.

The latest version of this protocol was released on Feb. 28, 2020 and is known as the ISIMIP2a-extended protocol. 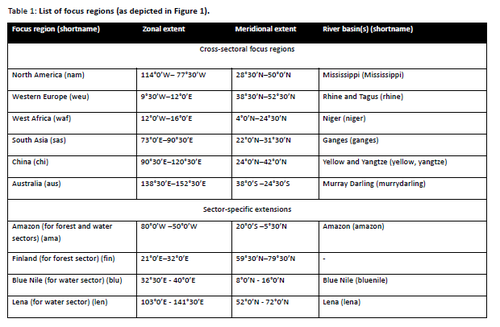 Changes to file-naming conventions
The file-naming conventions for output file has been updated to include a tag to indicate the target climate data set for the bias correction. The standard file name now has the form: <modelname>_<obs>_<bias-correction><clim_scenario>­_<socio-econ-scenario>_<sens-scenarios>_<variable>_<region>_ ...

Addition of references for input-data sets
References for the four observational climate data sets for ISIMIP2a have been added to table 3.
See all