The ISIMIP cross-sectoral workshop took place on 22-24 June, 2016, at the Potsdam Institute for Climate Impact Research (PIK) in Potsdam, Germany. All members of the ISIMIP community were invited to join us for the workshop in Potsdam.

The key goals of the workshop are:

Here is the final version of the program and participant list. Below you will find links to the presentations.


Joint session on economic costs of climate-change impacts (Wedneday AM)

Hans-Otto Pörtner: What are the breakthroughs needed by the impact community in the next 2-3 years with respect to a quantification of socio-economic impacts?

Hermann Lotze-Campen: What can an integrated assessment of impacts, mitigation and adaptation look like?

Eric Galbraith: Technological progress was the main driver of changes in ocean fish harvests over the 20th century (slides not available)

Louis Francois: Response to droughts and heat waves of the productivity of natural and agricultural ecosystems in Europe within ISIMIP2 historical simulations (see here for presentation - password protected)

Hanqin Tian: The sensitivity of terrestrial primary productivity and soil respiration to changes in precipitation and temperature using ISIMIP2a simulations

Fred Hattermann: Cross-scale review of the water-model results from the ISIMIP2a simulations

Impacts of 1.5°C warming (Thursday AM)

Anne Biewald: What needs ISIMIP to in order to say something about climate change and agriculturally related poverty?

Detailed instructions can be found here.

From Berlin to Potsdam

If you are coming to Berlin by air, you will most probably arrive at Berlin Tegel Airport. Outside the airport buildings you will find Berlin transport buses (BVG), No. X9 and No. 109.

If you arrive at Airport Schönefeld the fastest way to get to Potsdam Hbf is to take the Regional Train (RE-train) from the airport. It leaves about every ½ hour from platform 6 (make sure though the sign says Potsdam Hbf.). You can also take another RE-train (from platforms 3 or 4) and get off at either Alexanderplatz or Berlin Hbf. and change to the RE-train to Potsdam Hbf.

On arrival by train at the Berlin main station (Berlin Hbf.) take the regional train (RE-train) departing from platform 13.

Once you arrive at the Potsdam railway station you may either take a taxi up the Telegraphenberg - which is recommended if you have heavy luggage to carry. Or you can walk, which takes about 15 minutes. From the train station take the exit Friedrich Engels Str., cross the tram- and bus-station as well as the Friedrich Engels street, take the footpath (50 m) to the next parallel street (Heinrich Mann Allee), cross it at the traffic light and walk uphill 100 m to the next traffic light. There you turn left into 'Albert-Einstein-Str.' which first leads you through a small residential area and then through a wooded area. Finally it ends right at the gate of the 'Einstein-Wissenschaftspark', where PIK and other institutes are located.

A minibus (No. 691) leaves Potsdam main station (platform 7) heading towards ‘Einstein-Wissenschaftspark’ in the mornings and in the evenings. 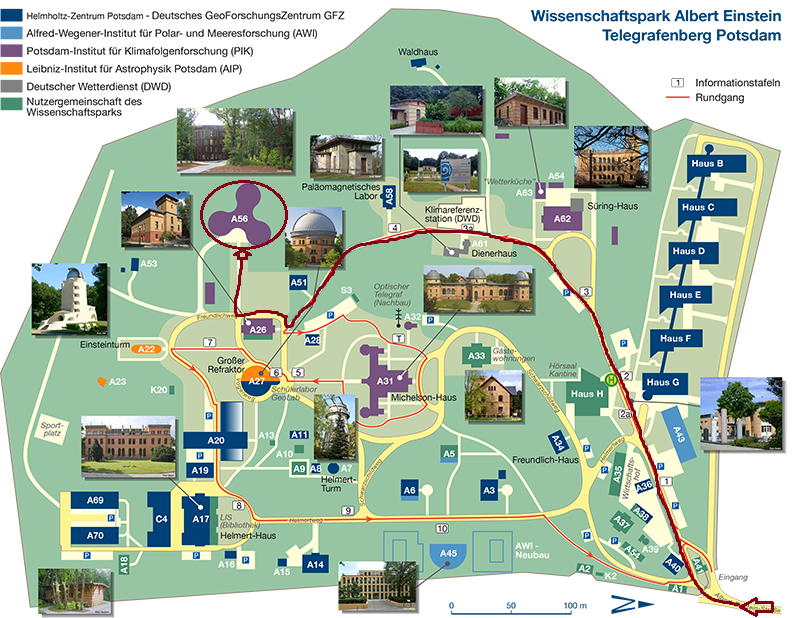 Once you have entered the Telegraphenberg campus there is still a little walk ahead. The thick, dark red thread on the map above demonstrates how to get from the entrance of the building A56 on the other side of the campus.

Follow the main road from the guard house at the entrance turning to your right hand side. Walk for approximately 5 minutes until you reach an old building with a circular driveway in front of it (old trees in the middle). From there follow an unpaved road to your left. Follow it until you reach a junction in front of a small brick building. Turn right sharply, pass the brick building on your left and turn right again after ca. 30 meters. Then, you should already be on the A56 driveway leading directly towards the building.

Having arrived in A 56, please take the elevator (opposite of the entrance in wing “Sonne”) down to level -1. The conference room is the only major room on that level, so you cannot miss it. If you prefer to not use the elevator - in each wing of the building is a staircase which also leads to the basement level.

This event is co-organised by the COST Action PROFOUND, PIK and the German Ministry of Education and Research 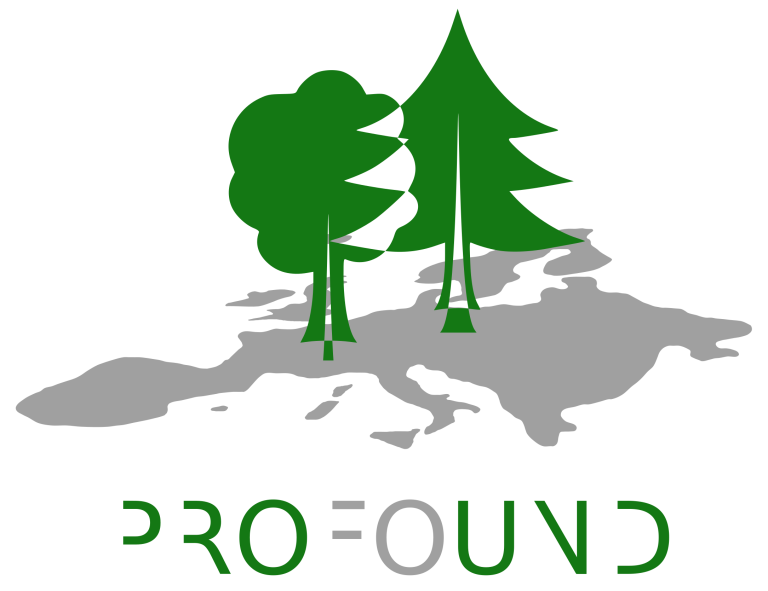 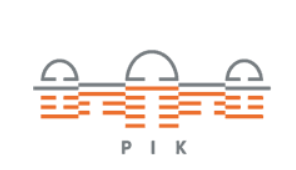 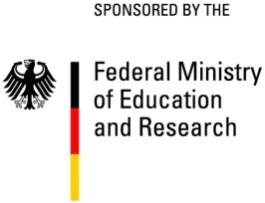